I'd like to suggest two additional zones in Hillerød. For tourists, Frederiksborg's Castle is the natural place to stop. There is already a zone outside the castle today "FredsSlot" (it would be cooler if this was on the actual courtyard with the fountain 100 meters east-southeast, open to the public), but equally famous as the castle is the Baroque Garden (Barokhaven) which is also open for the public. Only when you zoom in (the blue area on the left picture below) can you see it's true magnificence (picture to the right below). There should be a new zone called "Barokhaven" on the bridge in the garden (green in picture). It would also be natural for the touristing turfer to walk the full round around the lake, for this there is a gap which should be filled with another zone "Slotssøen" (also in green below). These two new zones would give visiting turfers a memorable experience. 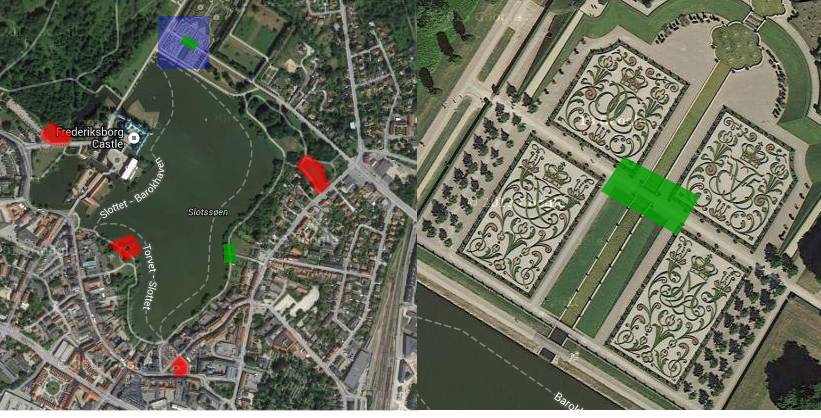 For anyone who goes there I can strongly recommend a visit in the castle. This is a museum open for a small fee and you can visit most of the castle rooms which are all filled with arts from several centuries (some depicting Danes beating Swedes in various wars which we all know is a propaganda lie